Cobourg is proud of its Heritage with four heritage Districts centred on Downtown and King Street (more at the Town's web site here). Apart from many magnificent homes that were built in the late 19th century, the centre-piece is the magnificent Victoria Hall in the heart of Downtown. 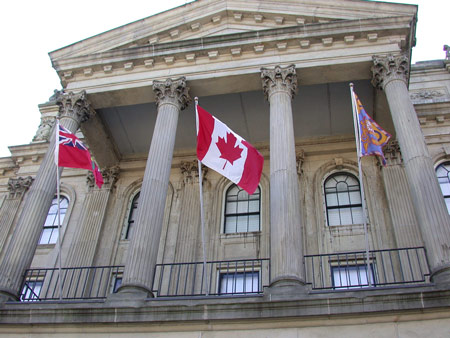 Victoria HallBuilt in the 1850s, it's the centrepiece of History and Architecture in Cobourg.  At right is how it is today but in the 1950s it was not in good shape (see also on About page), after years of successive town councils paying no attention to maintenance, the inevitable happened. In 1970-71 Victoria Hall was declared structurally unsafe and it was vacated. A band of Cobourg citizens, interested in local history, organized themselves into the Society for the Restoration of Victoria Hall. Architect Peter John Stokes was hired to draw up plans to restore the building to its original grandeur and also to bring its operating facilities into the 20th century.

Years of hard work by dedicated volunteers, generous donations by thousands of individuals, corporations and foundations and grants from federal, provincial and municipal governments finally paid off and the restoration was completed.

On October 7, 1983 Victoria Hall was officially re-opened by the Governor General of Canada, the Rt. Hon. Edward Schreyer. As in 1860, the festivities were crowned with a Grand Ball.

Edward, the young Prince of Wales, the future King Edward VII, came to Cobourg during his Canadian tour of 1860. On September 6 he officially opened Victoria Hall which was named for his mother Queen Victoria. Much to the delight of the local citizenry, he remained for the Grand Ball and midnight supper.

More on this event described here.

The building was designed by famous architect Kivas Tully and his three-storey building has many worthy features. The imposing entrance portico has four Corinthian columns, Greco-Roman roofed porch and a speaker's balcony. The building of white brick construction is faced on three sides with buff Cleveland sandstone and is elaborately decorated with symbols of the British Isles, carvings of lyres, dolphins, shells, a bearded head and other intricate examples of the stone-cutter's art. The ceiling of the portico is decorated with the restored painting of Cobourg's original coat of arms.

The symmetry of the building is emphasized by its 96 ample multi-paned windows and a glance toward the roof reveals the splendid crown topped cupola with its weather-vane and four crested clock-faces.

Inside, the grand design continues. Tully designed an E-shaped building to accommodate a variety of services. The foyer, the deep-well courtroom, the two grand staircases and the Concert Hall are the most impressive areas. However, the building has always housed the municipal offices for Mayor, Clerk and Treasurer, and the Council Chamber.

"Old Bailey Courtroom" The Courtroom is occasionally used for Concerts e.g. this one - First Night 2007 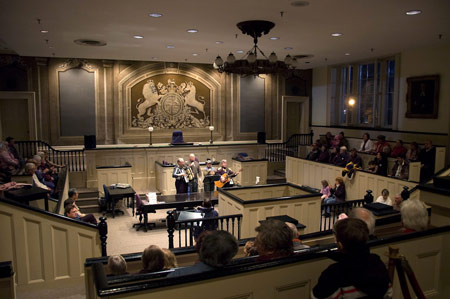 The Courtroom is modeled on that of the Old Bailey in London's criminal courts and is one of the few remaining deepwell courtrooms in Canada still in use (but no longer as a courtroom).  The room has seen some memorable trials - to name one of them - that of Sir Arthur Currie's action for libel against the Port Hope Guide in that he needlessly sacrificed men on the eve of the Armistice of World War I. The trial was held in 1928 where he was vindicated and granted token damages.  In 2018, a play re-enacting this event was performed in this room, the actual room where the trial was held.

The original ceiling of this court room was plaster. It deteriorated and was replaced by a wooden one in 1879. Under restoration requirements, this was removed and the present drop ceiling was put in, covering ductwork etc.

The Art Gallery of Northumberland on the third floor, west wing, has been accorded the honour of being a National Exhibition Centre by the National Museum of Canada. It features new exhibits every 3 months or so.

At the front and to the right is a small gallery named after Paul Kane, the famous Canadian Artist who was married to the daughter of F. S. Clench a prominent cabinet-maker of Cobourg who lived in a building on King Street West opposite the West Collegiate (now William College).

The gallery's collection is quite extensive - more information at their web site.

Other rooms are used for Council meetings and a recreation of what the Office of James Cockburn might have looked like.  James was one of Canada's founding fathers and lived in Cobourg.  More here.

In summer, tours are conducted of the building.  But not in 2020. For information about walking tours of the Heritage Districts, go here. More on the History of Victoria Hall here.

The space behind Victoria Hall is called Victoria Square and in around 2015 it was proposed that this space be enhanced to become a multipurpose pedestrian friendly square,  The final report and design was provided in April 2017 but the estimated cost was approx $1.5M.  It was decided that this was beyond Cobourg's budget unless a grant of around $1M could be obtained from upper levels of government.  Despite several attempts, this has not yet been awarded to Cobourg.  Below is a video explaining the project.

Since this project was put forward, the farmer's market has moved across the road to Rotary Park and the Condo development on the East boundary has not yet happened and remains a parking lot.

In 2016, a Heritage Master Plan was developed.  Download here.