The Harbour is a defining feature of Cobourg – enclosed by the East Pier and the West Headland, locals think of it in two parts separated by the Central Pier. The east side includes a Marina, a Coast Guard station and boats from the Cobourg Yacht Club. The west side caters to a boat launch, dragon boats, canoes, kayaks and a sailing school. The West headland is natural and is a favourite spot for bird watchers.  Over the past few years there have been suggestions of expanding the Marina into the West Harbour but this has been strongly resisted by Cobourg residents.  Recently, it was decided to upgrade the East Pier to make it more attractive and a destination. But preliminary work found that as well as the East Pier, other harbour walls needed work. This work will take place over the period 2022 – 2024.

One of the reasons settlers came to Cobourg in the early 1800's was the natural harbour formed by MidTown Creek. However it was only suitable for small boats and in the late 1820s, schooners with cargo and passengers had to anchor well off shore because Cobourg's harbour was nothing more than a landing wharf.  So on March 20, 1829 the Cobourg Harbour Company was established by a group of prominent Cobourg businessmen and by 1832 they had built the East Pier.

In 1850, Cobourg council purchased control of the harbour and began repairs to the existing piers and enlarged the harbour mouth. This widening of the shipping channel allowed larger ships to dock at the East Pier. A new breakwater was built (the West Headland) as was a new warehouse and lighthouse in the harbour. The harbour could now support 100 vessels and four steamships and several schooners arrived in town daily.

Ore CarAround that time, there were plans to build a railway from Cobourg to Peterborough across Rice Lake.  This operated for a time but even with its demise there was still rail traffic carrying iron ore from Marmora.

From 1907 to 1952, two ferries transported passengers and Iron Ore from Cobourg to Rochester, NY.

But in the 1980's local visionaries wanted open space at the waterfront so gradually all vestiges of industry were removed although it did not happen overnight.  The image above right is of a rebuilt ore-car on display at the west end of the harbour.

For a much more detailed history of Cobourg and its harbour, visit CobourgHistory.ca - OR
Waterfront History - start at Part 1. 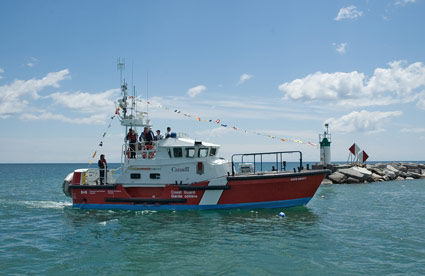 Coastguard boat entering Cobourg harbourThe Coast Guard keeps one of its smaller ships at a berth off the East Pier and they can sometimes be seen heading out to help out.  They are currently planning to rebuild their building which houses full-time staff stationed at Cobourg. Work started on this in 2022.

The Marina is operated by the Town and fees cover all costs.  They cater to both transient and seasonal users.  There's more on the Marina here. The yacht club has their own club-house adjacent to the Marina Office.  They have regular events and membership is open to all – for a fee.  There's more information at their web site here.

In winter, you will usually find a good number of cars parked in the marina parking lot with people enjoying a coffee and watching the birds – mostly gulls and ducks.  In summer, there's the occasional boat being launched on the boat ramp and others such as kayakers and small sail boats  There's a dragon boat event in September as a fund-raiser for the United Way and contestants practice in the months leading up to that.  You can walk out along the West headland but you have to walk around the large area used to store boats over the winter.  To the west is the “west beach” which is also undeveloped.

In 2009, Cobourg purchased a dredge, later named the Marie Dressler, to keep the harbour in good shape.  It is used regularly to keep the entrance at a depth of 12 feet as well as grooming other locations.  In 2017, sand recovered was used to build up Victoria Beach to minimize the impact of the high water levels.  It is also rented out to nearby Lake Ontario Towns and the revenue gained means that there is close to zero net cost.